Attempting to install a POC for VMware vCloud Automation Center 5.1 (vCAC) and running into an issue when it asks for the license key. I have downloaded the key from the VMware site, and followed the advice in KB Article 2042327 :-

This issue occurs if the file downloaded from vmware.com is in an incorrect format.

To resolve this issue, change the file name from *LicenseKey.txt to *LicenseKey.xml and then retry the installation.

but for some reason I keep getting the following error. 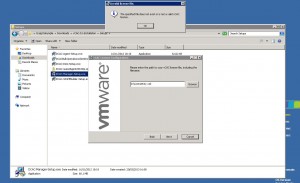 Call logged with VMware License team, hopefully they can suggest a work around.

Who’d have thunk it, IE managing to do something Chrome couldn’t!!